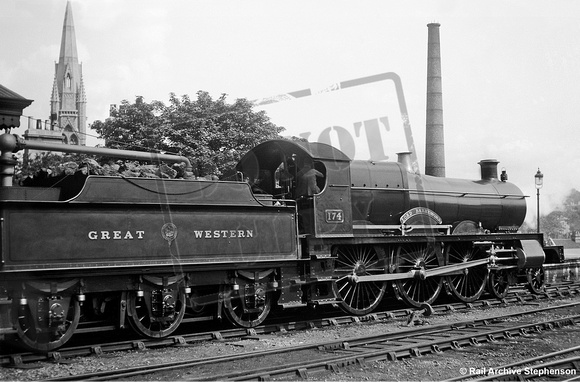 Peter Kerslake says"
This is a very early image from 1905 of "Saint" 174, built at Swindon in March of that same year, depicted at Bath Spa station, possibly on trials or "Running In" from the Works and coupled to her 3500 gallon tender
174 had been built as a 4-6-0 in company with five of her sisters whilst the remaining thirteen of the class built that year emerged with the earlier 4-4-2 "Atlantic" wheel arrangemeent.
Whilst a number of the class ran for a while without nameplates, 174 would seem to have been named at an early date as her "Lord Barrymore" plates are already in position in this early view.
In late December of 1912 this engine was renumbered 2974 but retained her same name, being withdrawn from service in March of 1933."