Galleries 0
Collections 27
Groups 3
David was born and brought up in Stockton on Tees, the cradle of railways, and living within sight of the main coastal route to Newcastle it was almost inevitable that railways in general and steam in particular would feature in this young man's interests. Whilst his like-minded friends contented themselves with underlining their abcs, it seemed more important to him to get a permanent record with a photograph. The first pictures were taken using a Box Brownie in summer 1958 but Xmas that year brought a Kodak Retina 35mm camera and the serious taking of photographs began. Time was short as the scrap yards were filling up and classes disappearing apace. Darlington was a 10 mile bike ride away and visited regularly but school trips further afield to Newcastle, Edinburgh, Doncaster and even the London area all featured before the schooldays were over. Add to this, solo trips to various enticing locations around the country and you will see that this was a mission in making. It was fortunate that he began a degree course at London University in 1962 so was in just the right place to see the end of steam out of Kings Cross in June 1963. On graduating in 1966 a move north to St Andrews University to pursue a research degree allowed the final vestiges of steam in Scotland to be recorded. By now equipment used had progressed to a larger format quarter plate camera as well as a Rolleiflex twin lens reflex.

When BR steam came to an end in this country, industrial steam became an attraction and following that, the steam scene in Germany. This included an official footplate trip on a DB Pacific from Rheine to Emden in 1974, but then the camera was put away whilst a career in further education and raising a family took centre stage.

Retirement in 2003 and the availability of high quality digital scanning machines saw the negatives being brought back to the fore as digital images were prepared of them all. Many stills had been taken in duplicate so a few of these negatives were sold but the larger format collection remains intact.

Shed visits have always featured but action shots were preferred as they were more challenging and potentially rewarding. For this reason, precious photographic lineside permits were obtained which gave access to some choice locations including Holloway bank on the climb out of Kings Cross Station.

When all the negatives had been scanned, more were purchased from collections which began finding their way onto the open market and the combined collection and archive now exceeds 2500. As a by-product to the digital manipulation, the adding of colour has become an important sideline and 'colourised' black and white scenes of 1930s and earlier is now high on the agenda.

All the historical railway magazines have carried articles and photographs from this collection in recent years. 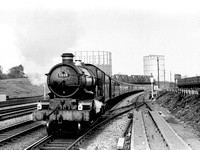 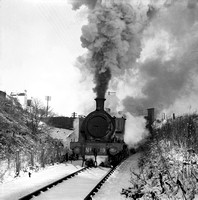 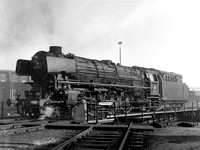