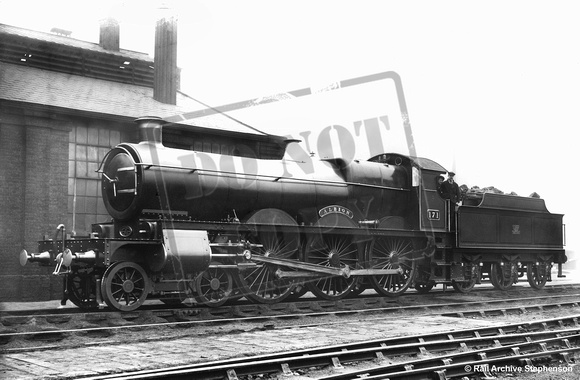 Peter Kerslake says "A nice image of 171, named "Albion", the third of what was to be the "Saint" class, this engine emerging from Swindon Works in December of 1903.
Originally without name 171 became "Albion" in February 1904 its nameplates being of the original design with no spacing plates between the plate and splasher, and "Albion" was destined to carry this original style of plate throughout its working life until being condemned in January of 1946 having been renumbered 2971 in late December of 1912.
For a period of just four months between March and July 1907 171 was renamed "The Pirate", regaining its original design "Albion" nameplates that July so this view must be post July 1907 .
That same month in 1907 saw 171 rebuilt, as seen here, to 4-6-0 wheel arrangement, and she could, therefore, just be fresh from that rebuilding at Swindon Works in this view."