Galleries 0
Collections 12
Groups 1
Born in 1949, I was brought up on former GNR territory in Ossett, West Yorkshire and attended Wakefield Grammar School. As a teenage chorister at Wakefield cathedral, my Bishop was Eric Treacy. I was thus always destined to be a railway enthusiast! My pre-teen weekends and school holidays were spent ‘spotting’ with mates at Leeds Wellington, Wakefield Westgate and Kirkgate with occasional forays by train to Doncaster. Squashed tomato sandwiches were my preferred fodder, washed down with ’Tizer’. Illicit visits to Leeds Holbeck and Doncaster sheds and ’The Plant’ were highlights of these adventures. Sunday cycle visits (via the canal towpaths) to Mirfield, Normanton, Wakefield, Royston and Ardsley sheds were met with virtually no opposition by railway staff. “Mind tha’ dooant fall dahn’t ash pit” was about the only comment offered! It was not uncommon to see over 100 locomotives on these excursions.

In my teens, I joined ‘Wakefield Railfans Club’ and recall many happy times at their club HQ in the former Midland Railway station at Walton, near Wakefield. Their organised (-ish!) shed visits took me to London and Scotland as well as more local destinations. Luckily for me, my paternal and maternal Grandparents lived respectively alongside the ECML at Dringhouses, York and near Hest Bank, Morecambe on the WCML. As you might imagine, I spent as much holiday time as possible with them, discovering that the delights of Carnforth and Lancaster were within easy reach by bus.

After I retired, I have been greatly influenced by Brian Stephenson of Rail Archive Stephenson fame. His superb shows to my local railway club and his photographic masterwork ‘Locomotives Illustrated’ was (and is) my continuing reference and inspiration. I decided that the restoration of historic railway photographs was to be my passion. I have been fortunate indeed over the last decade, to acquire (or been given access to) some magnificent archives. I am delighted that Rail-Online can showcase just some of these wonderful scenes and bring them to a new, hopefully appreciative audience. 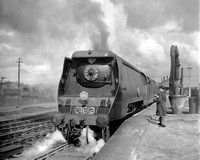