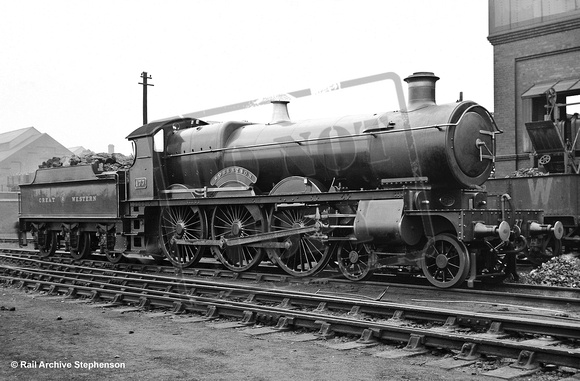 Peter Kerslake says "Following behind the three earlier prototype "Saints", numbered 100, 98 and 171 came nineteen further locomotives, with 177 seen here being built at Swindon in April of 1905, but not receiving its "Robertson" nameplates until April of 1907 with a number not having been named during their early years in service.
The names of these "Saints" came from characters in the novels of Sir Walter Scott and 177 was one of six of that Lot built as a 4-6-0, the remainder being constructed with the 4-4-2 wheel arrangement until being converted to 4-6-0's from April 1912 and January 1913.
Seen here with its original numbeplates in place 177 became 2977 in late December of 1912, remaining in service until February of 1935.
Early years in service saw the "Saints" working from Wolverhampton, Old Oak Common, then known as Paddington and South Wales, and later mainly being concentrated at Old Oak for duties on the Westcountry passenger rosters in addition to working the heavy Fishguard boat trains and South Wales Top Link duties between Cardiff and Paddington."