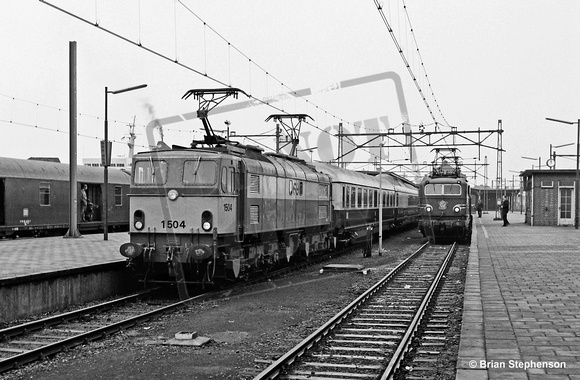 Peter Kerslake says "Following their withdrawal from the Woodhead trans Pennine route in 1968 all seven of the class EM2 electric locomotives were sold by B.R. to the Netherlands State Railway where much earlier in September of 1947 the prototype EM1 "Tommy" had served so well for five years.
The seven EM2's, numbered 27000 to 27006 inclusive whilst in service on the Woodhead route were renumbered by the Dutch authorities as 1500 to 1506 inclusive and whilst former 27005 was retained as a spare locomotive the remaining six worked in the Netherlands until 1986, modified with air brakes and a single pantograph.
Three were retained for preservation by the Dutch authorities, with "Diana" , the former 27003 remaining in Holland, whilst the former 27000, renumbered 1502 and named "Electra" together with the former 27001 now "Ariadne", and renumbered 1505 were returned to the U.K., with the former repainted before leaving Holland into her former B.R. colours."