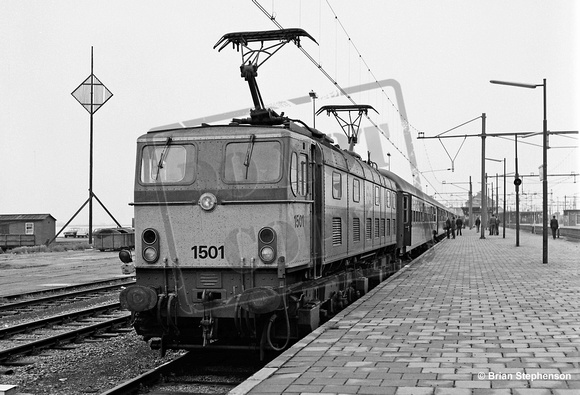 Peter Kerslake says "Following purchase from B.R. by the Netherlands State Railways in 1968 and now renumbered 1501 the former 27003 together with her six sisters saw service in Holland until 1986 before their second withdrawal, having initially been withdrawn from the Woodhead route in this Country in 1968.
The Dutch dsign of single arm pantograph shows well in this view, and it was this member of the class which, following withdrawal, was restored for preservation in Holland, whilst the former 27000, renumbered 1502 and the former 27001 which became 1505 were generously donated by the Dutch to B.R. in August of 1986, returning to this Country via Zeebrugge and Harwich, the former being restored to her original green B.R. livery before leaving Holland
Whilst in service in Holland the former EM2's ran a total of over two million miles, more than double that covered in their earlier years between 1959 and 1968 whilst on the trans pennine route, their purchase proving to have been a good investment for the Dutch authorities."