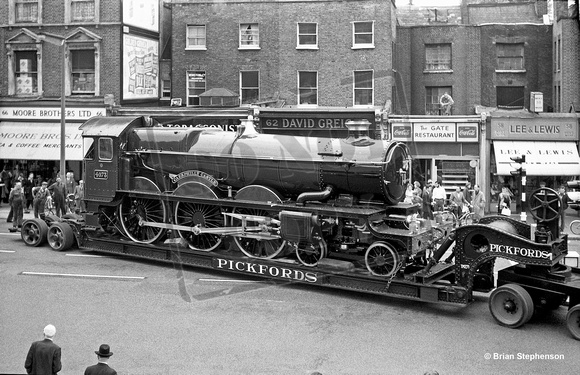 Peter Kerslake says "Sunday morning spectacular on the 4th. June 1961 as the restored 4073 "Caerphilly Castle", its original 3500 gallon tender similarly borne on a second low loader just behind maks its way from the Park Royal depot to its new home at the London Science Museum where it remained for forty years.
Two ladies at the top floor window above the tobacconists are peering through their curtains whilst a chap on his balcony above the Gate Restaurant" has a grandstand view.
Following withdrawal from Cardiff Canton and restoration at Swindon 4073 had earlier been towed by a Diesel shunting locomotive from Swindon to Old Oak Common's clean and smoke free Blue Pullman shed on Tuesday the 30th. May 1961 before being towed by the same Diesel on Friday the 2nd. June from Old Oak to Paddington's platform four where a formal handing over ceremony took place, the locomotive then being towed back to Old Oak on the following day after spending Friday on display at Paddington.
The transfer of engine and tender to the low loaders was begun later that same Saturday, the 3rd. June, again at the Park Royal works, the ensemble beginning its final journey from there to the museum as seen here at 8.a.m. on Sunday, 4th. June 1961.
This view shows that 4073's buffers have been removed as space on the trailer is clearly restricted "