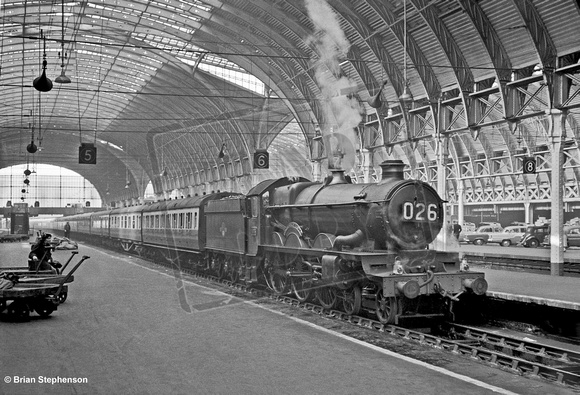 Pioneer GWR Castle class 4-6-0 No 4073 Caerphilly Castle on arrival at Paddington with the 8.15am Saturdays only from Abertillery on March 27, 1959.
Peter Kerslake says "A classic setting with Brunel's Paddington shown to full advantage - it must have been a sunny day as the light has highlighted the detail of everything.
4073 "Caerphilly Castle" has worked up from its home at Cardiff on this duty from South Wales and may well return there later in the day after being turned and checked over at the Ranelagh Bridge depot just outside the station. This was a common practice for Canton engines and their footplate men at this time when working a daily "Out and Back" duty from Cardiff to Paddington and return.
4073 had been shedded at Canton from February of 1957 and despite its age is clearly still capable of handling a substantial load with certainly more than ten coaches behind the tender".
Photo: Brian Stephenson
Brian Stephenson
Powered by ZENFOLIO User Agreement
Cancel
Continue