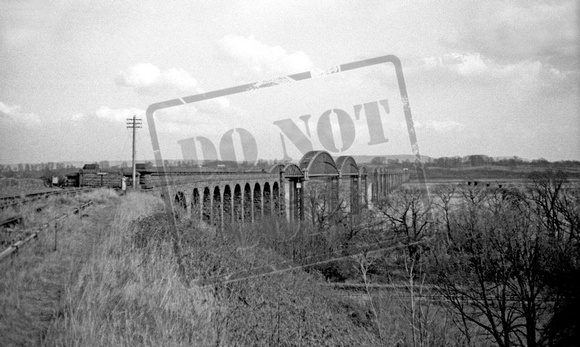 Peter Kerslake says "This is the Welsh side of the Severn Bridge looking across to the Gloucester side on the far bank of the Severn, the line clearly "gated off" and overgrown following the accident late at night on the 25th October 1960 which brought down two spans, ended through services and saw the eventual demolition of the bridge some eight years later.
An essential on a direct route across the Severn for schoolchildren and commuters between Gloucester, its small hamlets and stations such as Sharpness as well as providing a diversionary route when the Severn Tunnel was closed for maintenance the bridge was struck on the night of 25th October 1960 when two barges fully loaded with fuel oil and petrol, and illegally lashed together, hit the 17th pair of piers resulting in an explosion from the ruptured gas pipes affixed to the bridge, with the loss of five crewmens' lives from the two barges.
"Back Track" magazine of July 2003, volume 17 number 7 has a splendid article on this subject.
The cameraman is standing on the exact site of the former Severn Bridge station, the last calling point on the Welsh side of the line from Lydney Town and Lydney Junction before reaching the bridge itself.
The little halt at Seven Bridge served the nearby hamlet of Blakeney and originally had an exceptionally high signal box which provided its signalman within with a fine view back toward Lydney and the Severn Bridge tunnel of some five hundred yards in length, in addition to giving panoramic view across the Severn River itself.
The twelve arch stone seventy foot high viaduct seen in this view crosses over the main line between Gloucester and South Wales to Newport and beyond, that line still being in service today .
© Rail-Online
Powered by ZENFOLIO User Agreement
Cancel
Continue