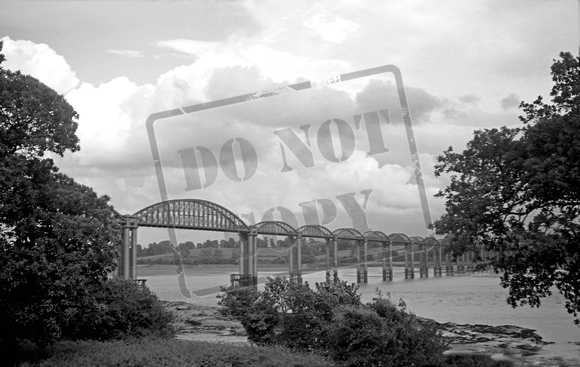 Peter Kerslake says "A nicely composed panoramic view of the Severn Bridge, linking the Gloucestershire bank of the River Severn adjacent to the little hamlet of Sharpness with the far shoreline within the Forest of Dean by means of its 4162 length made up by thirteen masonry spans on the far side together with an additional twenty one spans on the Gloucestershire side.
A 400 ton swing bridge carried the rail line across the River here as well as over the Gloucester and Berkeley canal, a vital waterway linking the Severn Estuary and Bristol Channel with the major docks complex at Gloucester, the swing bridge being pivoted on rollers and driven by a pair of steam driven engines.
Built by an independent company in an effort to lessen the rail journey between South Wales and Gloucestershire the line became a useful diversionary route when the Severn Tunnel was closed or obstructed and also gave direct access to the small dock at Sharpness for coal produced by the small mines operating deep within the depths of the Forest of Dean.
It all came to a sad end, however, on the foggy night of 25th. October 1960 when a laden oil barge broke away from its tug, drifting uncontrolled into the bridge and exploding, thereby bringing down two of the spans, and the bridge was never repaired.
© Rail-Online
Powered by ZENFOLIO User Agreement
Cancel
Continue