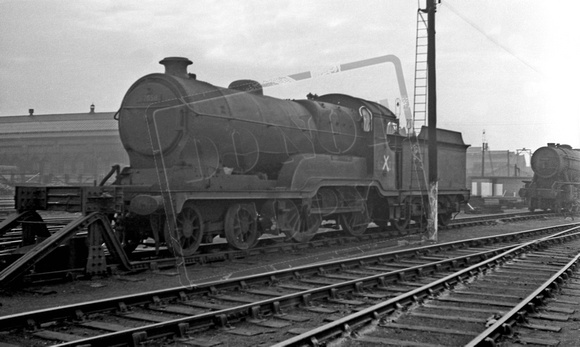 Withdrawn and stripped of nameplates.

Peter Kerslake says "The dreaded "X" on her cabside says it all and 62658 "Prince George" has run its last mile, being condemned in August 1955, the year this picture was taken at Manchester's Gorton depot.
The tenth of John Robinson's original eleven class "D10 Directors" 62658 had been built in November of 1913 just before the advent of the First War with six more planned for construction in 1916, but the war prevented their introduction and it was not until late in 1919 when hostilities had ended that construction was renewed with 62660 "Butler Henderson" being the first of the "D11" class of "Improved Director" design which eventually totalled thirty five in number, the last twenty four being built under the authority of Sir Nigel Gresley in 1924 after the 1923 Grouping.
When new in 1913 "Prince George" had been allocated to London's Neasden M.P.D., working out of Marylebone but none of the "D10's" survived into 1956 as the last was 62653 "Sir Edward Fraser" which survived until October 1955."
Powered by ZENFOLIO User Agreement
Cancel
Continue