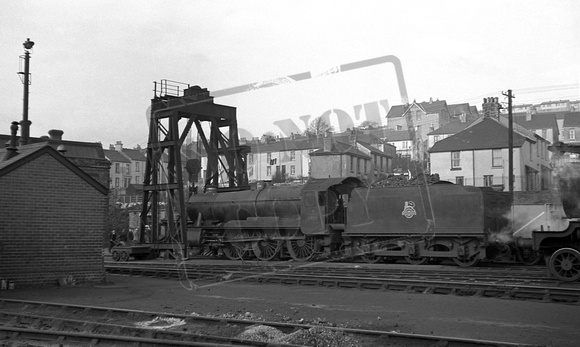 Laira's 1010, "County of Caernarvon" is under the crane on her home shed and has been separated from her tender with her bogie apparently already removed.
She's probably to be lifted in order for the fitters to remove a main axle and driving wheels set as I suspect there's been a "Hot Box".
Peter kerslake adds "I think that I 've got some of our band of enthusiasts in this shot , standing by the hoist and outside the Forman's office .
Many of the houses seen here would have been occupied by Railwaymen , living , as many were required to do , close to their home shed , whilst Laira Green School , a feature in many photographs taken here over past decades rises high in the centre.
Right on the skyline is part of the very first of many post war Counil housing estates , this being at Efford. "
© Rail-Online
Powered by ZENFOLIO User Agreement
Cancel
Continue