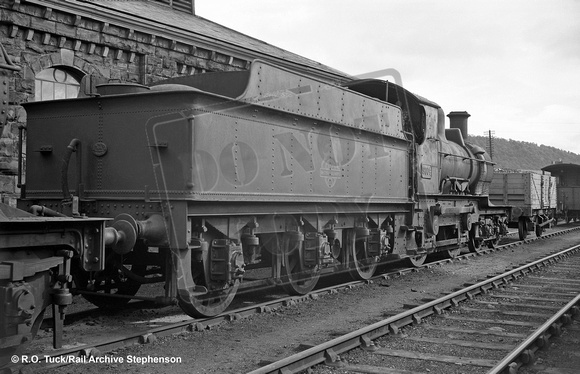 Peter Kerslake says "Little "Dukedog" 9004 was a Machynlleth based engine at this period in time but sadly later in June of 1960 she was condemned whilst allocated to Croes Newydd depot.
Built from the frames of "Bulldog" 3439 and "Duke" 3271 at Swindon in August of 1936 this engine was one of the initial thirteen which carried nameplates in the "Earl" series, with 9004, then being 3204 being "Earl of Dartmouth" until the nameplates were removed in 1937 and transferred to the new "Castles" entering service .
An early member of her class she would have spent many years working on the Cambrian system, the design of the class permitting them to be light enough to traverse the famous and lengthy Barmouth bridge yet powerful enough to handle both heavy freight and heavily loaded passenger workings over the Cambrian system throughout both Winter and Summer timetables."