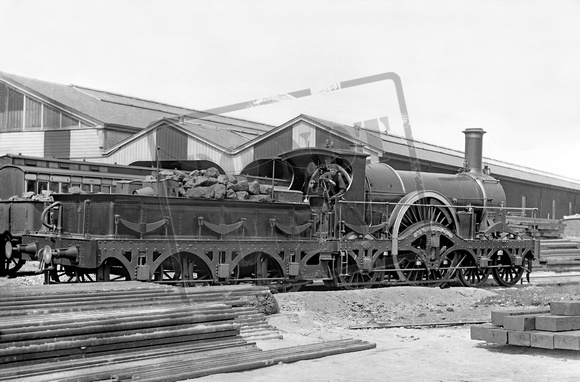 A glass half plate negative taken in 1891 at Westbourne Park, London by R Samson of the Islington Photographic Studio.

The Great Western Railway’s broad gauge system was in terminal decline with just months remaining until conversion to standard gauge was complete. Designed by Daniel Gooch, the 4-2-2 single wheeler ‘Swallow’ built in October 1872 was one of 30 of the ‘Alma’ Class. None of these locomotives carried numbers and many perpetuated names borne by the earlier Iron Duke Class which had already been scrapped. The massive 8’ driving wheels made this a fast machine, turned out to head the principle expresses of the later broad gauge era. It would have been a thrilling experience to be on the spartan footplate when hauling an express at speed but one wonders how the fireman will have coped with the huge lumps of coal piled up in the tender. A faint wisp of steam at the whistles shows that Swallow was in light steam at the time of this photograph. The last broad gauge train ran on the Great Western in May 1892.