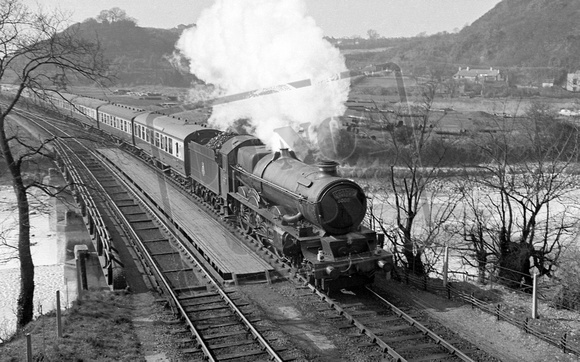 Peter Kerslake says " Taken from a footbridge at Saltram Park my picture shows Laira's 6008, " King James II " crossing the River Plym at Marsh Mills, just east of Plymouth, and building up speed for the forthcoming ascent of Hemerdon Bank which lies just ahead. The driver appears to have just opened the regulator following the easy drop down to sea level from North Road station past Laira shed a mile or so back.
It's difficult to see how many coaches the " King" has behind it, but the maximum for an unassisted " King" over the South Devon banks was ten, or 360 tonnes, and 6008, which has come on at Plymouth has no pilot engine in this view.
Laira have turned out one of their best " Kings " in fine style for this " Top Link " working."
Powered by ZENFOLIO User Agreement
Cancel
Continue