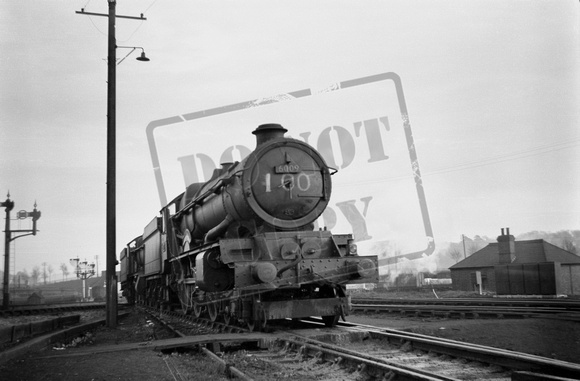 Old Oak Common's 6009 is at the very end of Laira shed's coaling line in this photograph and waits to be moved forward in order to have its fire " dropped " and to be recoaled further down the coaling line.
The chalked "100 " Reporting Number indicates that it has worked down to Plymouth from Paddington on the early 5.30.a.m. from the Capital, running via Bristol Temple Meads to arrive at Plymouth around mid-day.
6009, " King Charles II " had the unique distinction for a " King " in being allocated to just one Motive Power Depot for the whole of its working life whch ran from March 1928 until September 1962, spending all that time at Old Oak Common, a true London " King " to be sure.
6009 clearly displays the first style of inside valve spindle covers in my photograph, borne by the early members of the class, although some, but not all of them were replaced by the later style ( fitted to the later members of the class from new ) as and when those engines received replacement front frames and inside cyllinder blocks during overhaul at Swindon during the early and mid ' fifties.
Powered by ZENFOLIO User Agreement
Cancel
Continue