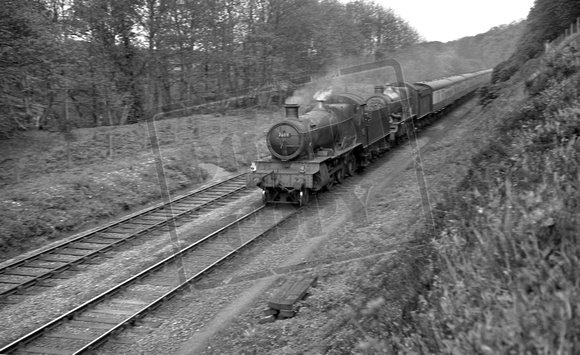 I wasn't too keen on attempting to photograph locomotives descending Hemerdon Bank as their high speed usually made for an unsatisfactory picture , but this one isn't too bad .
The date is May 12, 1956 and the down " Cornishman " , from Wolverhampton to Penzance is dropping down the one in forty two grade through Chaddle Wood with 5078 , " Beaufort " as train engine , piloted from Newton Abbot by 7809 " Childrey Manor ".
When these " Manors " were no longer required on such piloting duties with the influx of Diesel power a number were transferred to North Wales , working on the Cambrian lines to Shrewsbury , with this one being a very early withdrawal in April of 1963
Powered by ZENFOLIO User Agreement
Cancel
Continue