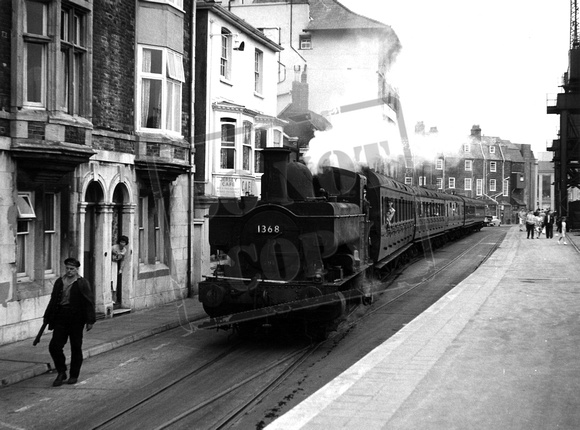 A scene that I don't quite understand, why is the loaded train in the loop and not in the platform?

Transferred to Weymouth from its earlier home at Swindon shed in early 1960 , this interesting image shows 1368 heading through Weymouth's narrow and often congested streets with its bell clearly visible mounted ahead of the cab and a shunter's pole on the front buffer beam .
The fireman was required to ring the bell whilst on the move , and a " shunter in charge " , complete with warning flags , walks ahead but rather closer to the engine than I believe the Regulations required !
The concerned looking lady at her front door might well be looking at some parked cars ahead of the train , a common hazard for these workings to and from the quay here at Weymouth.
© Rail-Online
Powered by ZENFOLIO User Agreement
Cancel
Continue