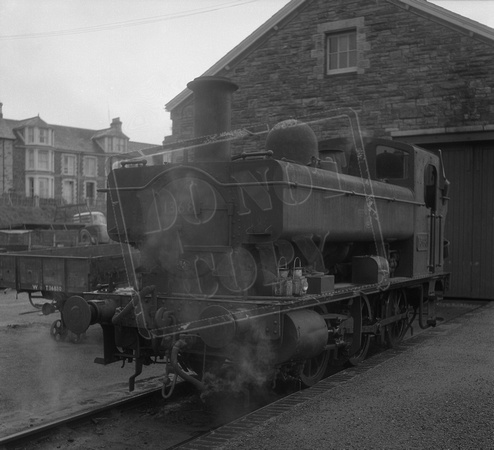 A shot of 1368 at her final home at Wadebridge , to where , in company with two of her sister engines she had been transferred from Weymouth in 1962 in order to work primarily the china clay freight duties a Wenford Bridge to and from Bodmin .
Wth their short wheelbase and small wheels the three little Pannier Tanks were considered suitable replacements for the by then very elderly Beattie Welll Tanks , so long associated with that area and the china clay duties.
Introduced in 1934 the six of the class had been built for use initially within the confines of Swindon Works , particularly on shunting tasks within the Carriage and Wagon Shops , the first withdrawal from service took place in 1960 when 1370 was condemned although its boiler was transferred to 1369 at that time , this being the only boiler change within the class which subsequently made 1369 the best of the three at Wadebridge .
Final withdrawals were in 1964 but happily 1369 survived into preservation and now resides at Buckfastleigh on the South Devon Railway.
© Rail-Online
Powered by ZENFOLIO User Agreement
Cancel
Continue