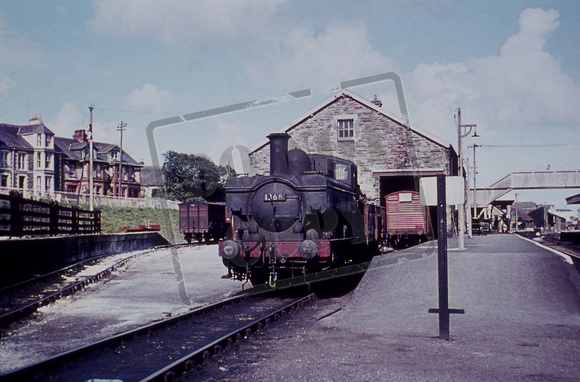 1368 was one of the three members of the former six strong " 1366 " class transferred from Weymouth to Wadebridge in mid 1962 following its initial evaluation period there in May of that year .
Of the three , 1369 was considered the best , with 1367 being in poor condition , whilst 1368 seen here was mainly confined to duties as yard station pilot at Wadebridge .
It was on the china clay freight workings that 1369 in particular was rostered , the trio having replaced the aged Beattie Well Tanks so familiar on that line for many years previously , working china clay wagons and vans from Dunmere Bridge through Boscarne Junction to Wadebridge and also through Bodmin General down to the main line at Bodmin Road where the wagons and vans would be taken down to Fowey Docks for their contents to be shipped on to waiting freighters
© Rail-Online
Powered by ZENFOLIO User Agreement
Cancel
Continue