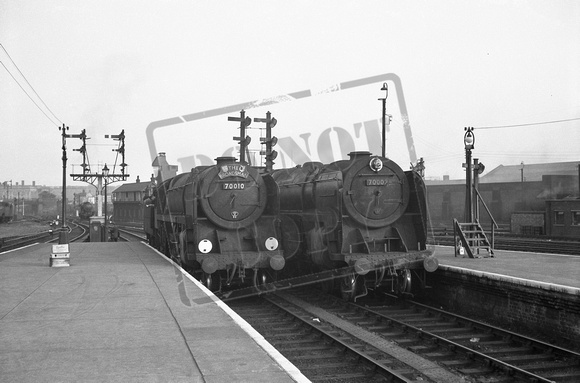 An interesting view from Norwich Thorpe on a Saturday in the mid-fifties, probably in 1956, with 70010 Owen Glendower on the left and 70002 Geoffey Chaucer alongside, both waiting the respective signal to back over to Norwich shed which is visible in the background. 70010 has arrived from Liverpool Street with the down Norfolkman whilst 70002 from its disc and lamp code, would seem to have worked in on a local stopping service.

Peter Kerslake adds "I couldn't have known it at the date of my photograph but the splendid work being carried out by the Britannias allocated to Norwich and at London's Stratford depot would all come to an end just five years later when diesel power came to the former Great Eastern main line resulting in the wholesale transfer away of the class to pastures new. Three of the later and newer Briannias were sent via March to Immingham from Norwich in late 1960 followed by 70002 which was first of the remaining and main allocation of Norwich Britannias to be moved not to Immingham but to March in June 1961. The reasoning behind such a reallocation has been lost with the passage of time, but suitable work at March for their newly acquired Britannias was not forthcoming and the majority were just stored out of use, although those similarly moved from Norwich via March to Immingham enjoyed a more rewarding life working the Cleethorpes expresses via Boston and Peterborough to Kings Cross. The wholesale transfer of all the Britannias to the London Midland Region in late 1961 fortunately delayed any premature withdrawals within their ranks. 70010, was sent from Norwich to March in December 1961 togther with 70006 Robert Burns and were the last two to leave Norwich according to my records".
Powered by ZENFOLIO User Agreement
Cancel
Continue