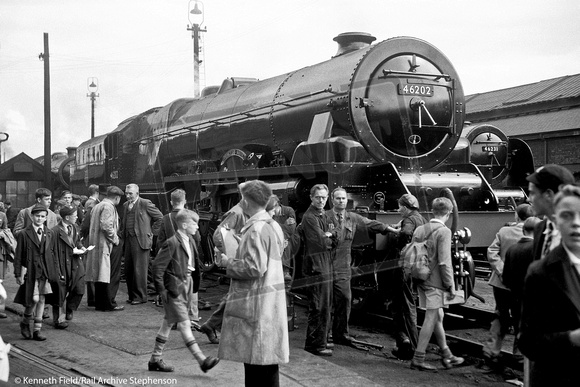 No.46202 Princess Anne newly rebuilt from the LMS 'Turbomotive' at a Crewe Works open day in August 1952.

Peter Kerslake says "The centre of attraction here at Crewe Works Open Day in August of 1952 "Princess Anne" has just emerged rebuilt from the former "Turbomotive" but who could possibly have even imagined in their worse nightmares that this splendid locomotive would last just eight weeks in service before being damaged beyond repair in the fateful Harrow and Wealdstone multiple accident so soon after this view and which occurred on the 8th October 1952.
A group of overall clad fitters keep watch on their pride and joy whilst some former railwaymen chat amongst the young enthusiasts, some in school uniform with regulation caps, raincoats and socks at "Half Mast".
Such a sad ending for such a fine engine."