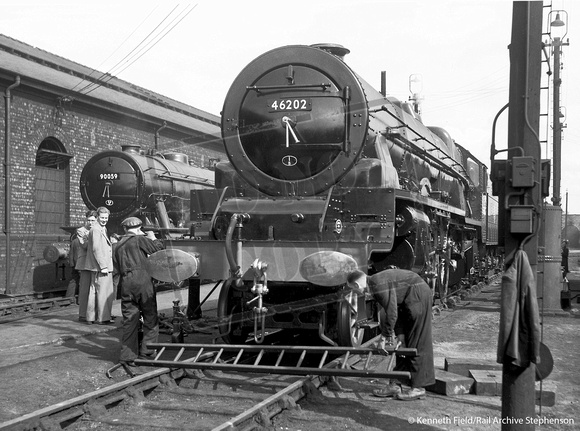 The newly rebuilt 'Turbomotive' No.46202 Princess Anne gets the finishing touches at Crewe Works in August 1952.

Peter Kerslake says "Rebuilt from the former "Turbomotive" here at Crewe at a cost of almost nine thousand pounds 46202, now named "Princess Anne", was the star attraction at Crewe Works open day in August of 1952, immaculately turned out as one would expect and with final preparations being underway here, probably before the doors opened.
Entering service on the West Coast main line passenger rosters on the 13th of that same month and running between Crewe and Euston disaster struck just eight weeks later early on the morning of 8th October 1952 at Harrow and Wealdstone.
Piloted by "Jubilee" 45637 "Windward Islands" and as train engine on the 8 a.m. departure from Euston to Liverpool and Manchester "Princess Anne" struck the wreckage of the previous night's 8.15 .p.m. sleeping car express which had just moments before collided at Harrow and Wealdstone station with the departing 7.31.a.m. Tring to Euston stopping service.
Following the accident "Princess Anne" was deemed beyond economic repair and the was accordingly officially withdrawn in May of 1954 after her remains had languished at Crewe with only her boiler being retained for use as a spare."