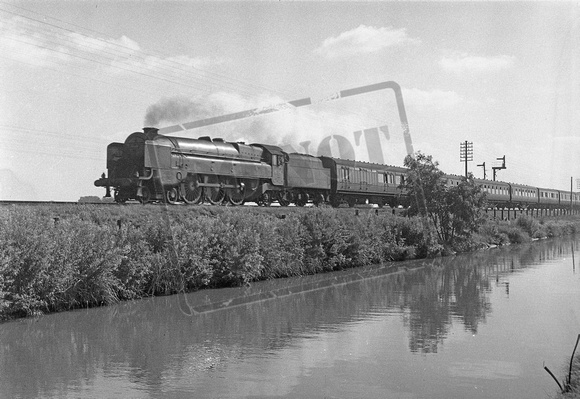 Now with its BR number, 'Turbomotive' No.46202 is reflected in the water of the Oxford Canal at Brinklow in the BR lined black received in March 1949. It ran in this livery only until May 1950, suffering several unscheduled repairs in the meantime, and was taken into Crewe Works where it was rebuilt as a conventional reciprocating engine, appearing in that form on 13th August 1952 and working for only eight weeks before it was damaged beyond repair at Harrow & Wealdstone on 8th October.

This superb image of the " Turbomotive " as she was known shows the left hand side with the elongated cover over the main forward running turbine , a much smaller version being on the right hand side for the reverse turbine.
Built by Mr. Stanier in mid 1935 and following his visit with a representative from Metroplitan Vickers , the company building the turbine units , to Sweden to inspect a 1932 steam turbine locomotive in service there , this engine performed well for a number of years , principally working an " out and back " daily roster between Euston and Liverpool .
It had its share of problems , however , and the soft exhaust found its way into the footplate , requiring an early fitment of the smoke deflectors.
There were lengthy spells spent under repair at Crewe Works , and so in 1952 following a period in store substantial repairs to the main forward running turbine were not carried out and the engine was rebuilt to a standard four cylinder design resembling both the " Princess Royal " and " Coronation " classes in certain respects .
Sadly , her life in her new guise was shortlived , however , as following severe damage sustained in the Harrow accident she was considered beyond repair and was accordingly withdrawn shortly afterwards.
© Rail-Online
Powered by ZENFOLIO User Agreement
Cancel
Continue