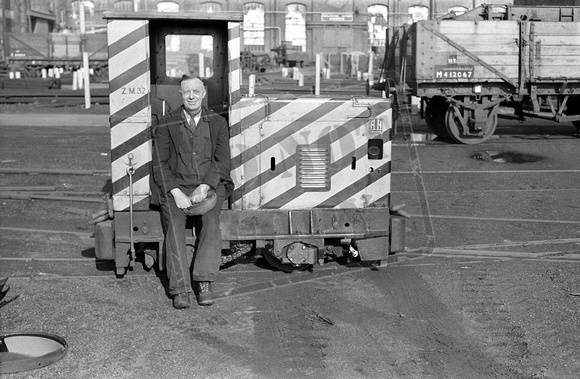 BR Ruston & Hornsby 18in. gauge 'LAT' class 20hp 0-4-0 diesel No. ZM32. Built by Ruston & Hornsby at Lincoln in 1957, withdrawn in 1965 and preserved. What is driver Charlie England thinking? He's pictured at the former Lancashire & Yorkshire Railway's Horwich Works in 1957 with newly-arrived ZM32. This was a replacement for the famous steam locomotive 'Wren' that had been the Horwich Works 18in. gauge shunter since Victorian times and was also in Charlie England's charge! The real oddities are ZM32s numbering system. Why did it have a 'ZM' prefix and had 31 others built built previously? Also, why did BR make no attempt to give it any form of their livery? Like "Wren', 'ZM32' is now preserved.