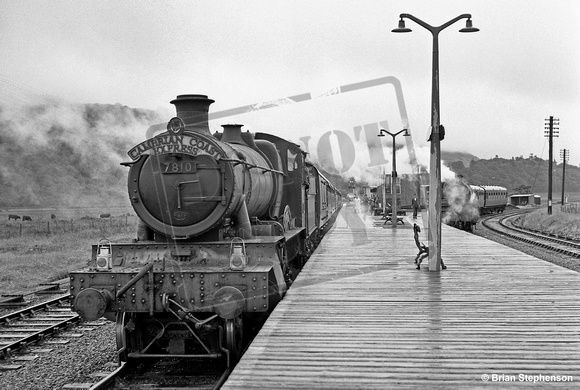 No. 7810 Draycott Manor at Dovey Junction with the Up ‘Cambrian Coast Express’ which it has brought in from Aberystwyth on 24th July 1963. On the right, a BR Standard Class ‘4’ 2-6-4T brings in the portion from Pwllheli that will be added to Draycott Manor’s train. No. 7810 was allocated to Oswestry from September 1959 until the end of 1963 when it moved to Machynlleth.
The prefabricated signal box and station buildings on the narrow platform are visible between the two trains. The line from Barmouth crossed over the River Dovey on a bridge just out of picture on the right and dropped down into the platform.