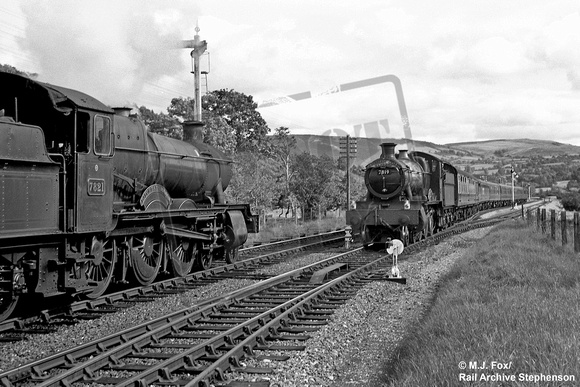 GWR Manor 4-6-0 No 7821 Ditcheat Manor waits at Carno with an Aberystwyth to Oswestry goods as classmate No 7819 Hinton Manor approaches with the down 'Cambrian Coast Express' on August 19, 1963.
Peter Kerslake says "Luck was on the side of of cameraman here and he's caught two "Manors" together.
7819 was the last of the twenty built during 1938/39 using parts from withdrawn 43XX series "Moguls" whilst 7821 was the second of the final ten to be built from new in 1950. 7819 spent itsearly years at Carmarthen, followed by spells at Oswestry, Neath and Machynlleth before being one of the last eight of the class to be withdrawn from Shrewsbury in November 1965. 7821 was at Newton Abbot, Stafford Road, Tyseley and Oxley before also being withdrawn from Shrewsbury in November 1965. Both made it into preservation."
Photo: M.J. Fox/Rail Archive Stephenson
M.J. Fox/Rail Archive Stephenson
Powered by ZENFOLIO User Agreement
Cancel
Continue