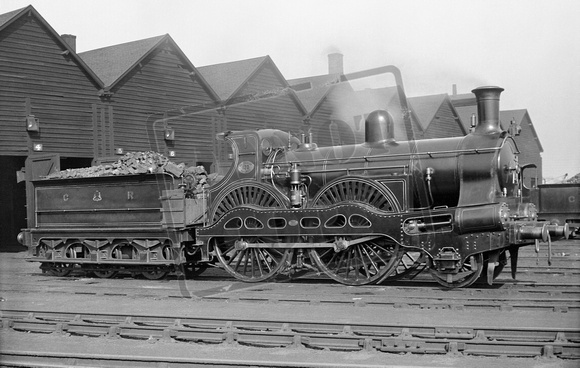 Caledonian Railway Connor '98' class 2-4-0 No. 120. Built by Neilson & Co. of Glasgow in 1868 as CR No. 469, re-numbered to 120 in 1876 and to 1120 in 1912. Withdrawn in 1914. In the days when it was deemed perfectly reasonable to build a locomotive shed from wood, here is a fabulous example of Victorian locomotive engineering outside Polmadie MPD in the 1880s. As seen here, the then fashionable open slotted or 'vented' splashers on railway locomotives could (and did!) cause the loss of fingers and toes. The Board of Trade obliged companies to plate them over to prevent such occurrences. No. 120 retained hers until withdrawal.