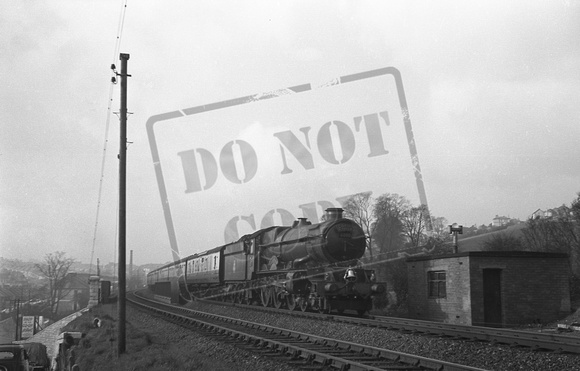 A Sunday "Cornish Riviera " in 1956 or so has no less than 6000, "King George V" at its head as it drops down over Trefusis Bridge at Lipson Vale shortly after having left Plymouth North Road on its run to Paddington.
The driver and fireman are taking in the view and will shortly see Laira shed on this side before they run alongside the River Plym and then tackle the 1 in 42 of Hemerdon Bank, but 6000 has no pilot engine so its load must be within the 360 tonne, ten coach maximum, not unusual for a Sunday working.
Prior to March, 1954 "King George V" had been the sole member of its class allocated to Bristol Bath Road Motive Power Depot from where it was rostered to West to North express workings through the Severn Tunnel to Shrewsbury and back, and as such was never seen in the far West.
Happily, all that changed and from that date and following a spell in Swindon Works it was re-shedded to Old Oak Common to work on the West of England line.
Powered by ZENFOLIO User Agreement
Cancel
Continue