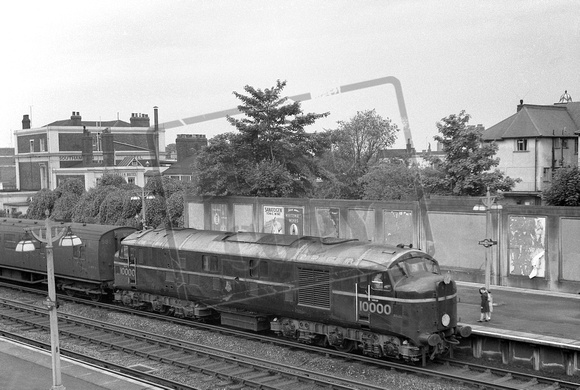 Pictured here at Surbiton on Southern Region metals the prototype L.M.S. Diesel numbered 10000 had been transferred to the Southern's Depot at Nine Elms from its Midland Region home at Camden in March of 1953 , to be joined by its sister 10001 during the following month .
Working from Waterloo to Bournemouth and to Exeter the locomotives suffered a number of failures during their respective periods away from their usual Midland Region haunts and both went back home to Camden in March of 1955 when they were then initially rostered to crew training duties between Euston and Bletchley before returning to their former more demanding tasks on the West Coast main line in April of 1955 , a role which saw them in such service throughout 1956 and 1957

Peter Kerslake adds "
A little lad and his sister get a close look at the prototype Midland Region Diesel numbered 10000 here at Surbiton during the two year period when both this locomotive and its sister were running from Nine Elms Depot on Southern Region workings between Waterloo and Exeter , Bournemouth and Weymouth .
Their time spent on Southern Region metals was not without problems , however , as both locomotives suffered numerous failures before returning to Camden in March of 1955 from where , after a short period rostered on crew training duties between Euston and Bletchley , they returned to their former duties on the West Coast main line , remaining on such workings throughout 1956 and 1957 before they were both transferred from Camden to Willesden in November of 1959 . "
© Rail-Online
Powered by ZENFOLIO User Agreement
Cancel
Continue