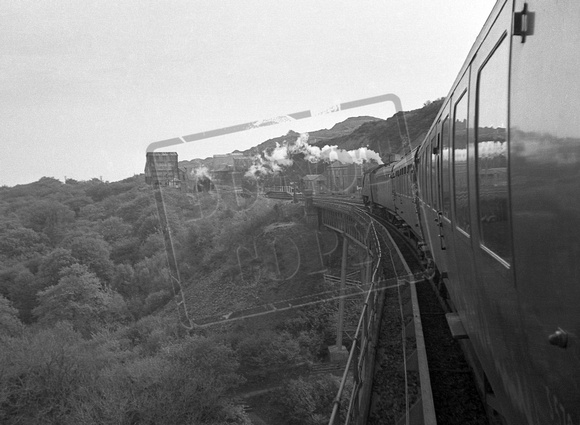 Peter Kerslake writes - In company with a few fellow enthusiasts we had decided on a "Southern Day" out on Whit Saturday, 21st May 1956, and we travelled from Plymouth to Exeter most unusually for us Western stalwarts on the Southern line va North Dartmoor, taking the 8.15 a.m. from Plymouth Friary as far as Exeter. I have captured the view from that train as we cross the splendid Meldon Viaduct, with Okehampton station ahead, and 34062 in charge up at the front end. A flying visit to Exmouth Junction shed before a trip to Lyme Regis on the branch from Axminster made for a memorable day out, I recall , with a few decent shots resulting. How was it that the sun always shone in those days ?

Further research now discloses that my view also includes Meldon Quarry halt , seen in the centre of my photograph and installed by the quarry owners to provide access to the main line by quarry workers living in the cottages within the quarry complex .
Part of the quarry complex is also visible , and the viaduct is 150 feet above the Okement river and valley below .
The quarry itself, some one thousand feet above sea level, opened in 1897 but it was not until 1905 that the true potential was appreciated by its owners, the London and South Western Railway and it was about this time that the first workmens' cottages were built within the site.
Powered by ZENFOLIO User Agreement
Cancel
Continue