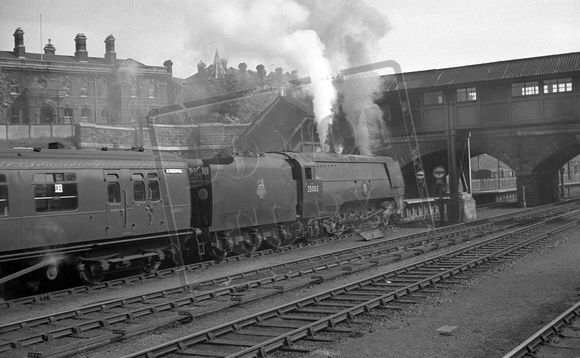 ‘Merchant Navy’ No.35003 Royal Mail One of eight in which the casing was made of asbestos board, with a visible horizontal fixing strip along the centre line, is ready to depart with the 10.30am to Waterloo. The larger Pacifics were too heavy to work beyond Exeter and therefore No.35003 would have come down from Exmouth Junction to take the train forward to London after the restaurant car and other vehicles had been added to the consist. That's Exeter Prison on the far left, so there would be plenty to see going on down at Central if you were lucky enough to be in one of the front offices.
Peter Kerslake says "This was taken on a "Southern Day Out" from Plymouth to Exeter on Whitsun Bank Holiday Monday, 21st May 1956 when a good selection of pictures was fortunately secured in and around Exeter. I worked at Exeter County Court and our offices were housed for a while in the building shown on the left, part of the Prison complex, but they let us out again each evening!"
© Rail-Online
Powered by ZENFOLIO User Agreement
Cancel
Continue