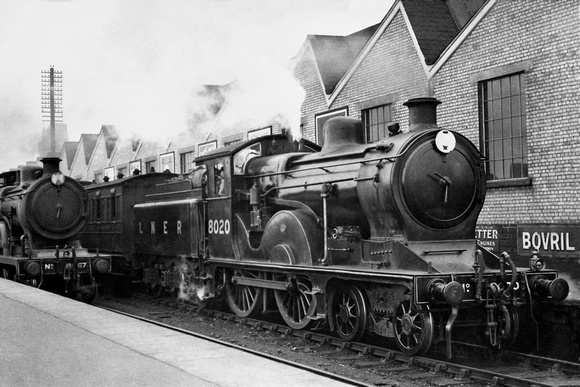 In one of the northbound bay platforms with the shed wall behind.

Peter Kerslake says "Immaculate 'Claud Hamilton' 8020 has a "Watercart" or "Bohemian" tender designed by the Gteat Eastern Railway originally to carry oil fuel and later fitted with coal guards to avoid spillage and with water pick-up provision.
Entering service in June 1895 this engine saw service from Doncaster, Cambridge, March and Kings Lynn befoe being withdrawn in April 1936.
8867 seen alongside was built in October of 1903 and as B.R. 62538 lasted in service until April 1952 at Norwich depot."
Copyright David P Williams Archive / Rail-Online
Powered by ZENFOLIO User Agreement
Cancel
Continue