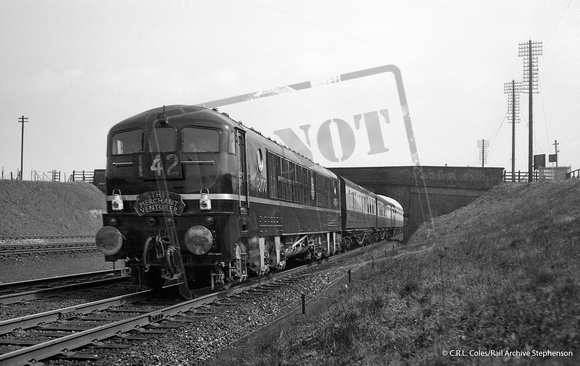 Peter Kerslake adds "Complete with headboard Metropolitan Vickers Gas turbine 18100 on the second day after it was taken into revenue-earning service. From 2nd August 1952, 18100 was moved to the more demanding workings between Paddington and Plymouth, the role for which it had been primarily intended, taking heavy expresses over the South Devon banks with no pilot locomotive needed.
The "Merchant Venturer" was introduced in May 1951 and ran until 1965, the down service leaving Paddington at 11.15 a.m. with just one stop at Bath at 1.01 p.m. and arriving at Temple Meads at 1.22 p.m. from where another engine would work it forward to Weston super Mare. 18100 workied back to Paddington from Temple Meads with the afternoon "Bristolian". Following a short time on the Plymouth line, 18100 spent a further two months working between Paddington and Bristol from July until September 1953."