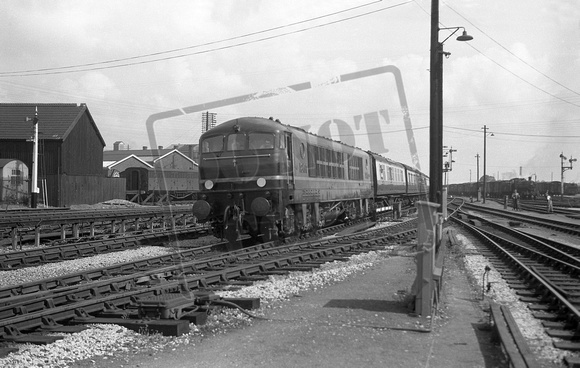 Some hardy souls are leaning out of the front coaches to take in the exhaust fumes!
This is the 11.0 a.m from Paddington to Plymouth, and there are Metropolitan Vickers engineers in the cab by the look of it. 18100 worked between Paddington and Plymouth following a series of runs between the Capital and Bristol which began in April, 1952. 18100 will return from Plymouth, after servicing at Laira, on th 7.04 p.m to Paddington (the 3.45.p.m. from Penzance) which ran via Bristol, due into Paddington at 2.00a.m. the following morning. 18100 suffered failures on this duty in August 1952 and was out of service until October.
Powered by ZENFOLIO User Agreement
Cancel
Continue