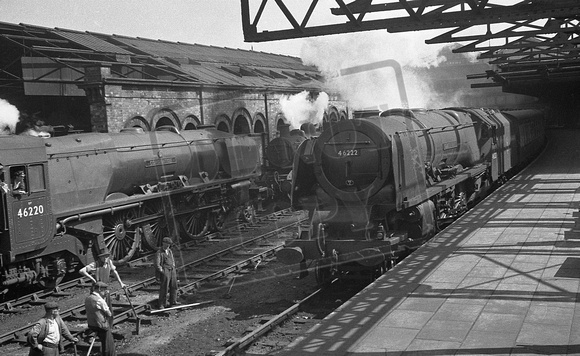 Peter Kerslake "It's a fact that very often a good shot was obtained by myself more by accident than by skill and this is what happened to me on this day at the northern end of Crewe station. The permanent way gangers take a break as 46222 Queen Mary sets off on what I recorded as being the 3.30.p.m. to Manchester. This is a large engine for that working although I believe that the class did occasionally work into Manchester (London Road) from Crewe . I may have got the working wrong!
Adding to the interest is 46220 which waits to back out to Crewe North shed having come off the 10.05 a.m. departure from Glasgow, which had arrived on time at 3.25.p.m., before proceeding on to Birmingham behind a fresh engine. 46220's youthful fireman watches the action and he has been joined by his driver. One of my better efforts from a couple of days at Crewe which produced some splendid images."
Powered by ZENFOLIO User Agreement
Cancel
Continue