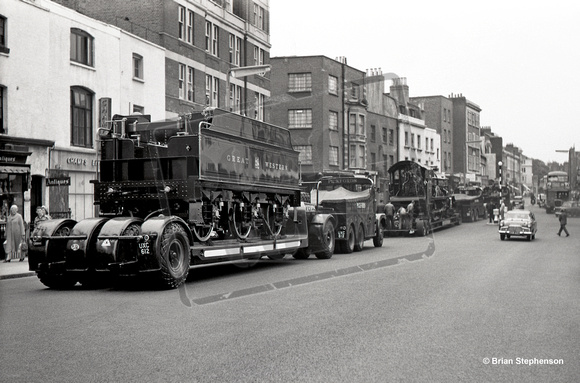 Pickfords Scammell 6-wheel tractor No M1826 UXC 612 passes down Kensington Church Street conveying the tender of GWR Castle class 4-6-0 No 4073 Caerphilly Castle to the Science Museum on June 4, 1961. The loco itself is ahead pulled by two Scammell tractors.

Peter Kerslake says "Clearly a Sunday morning , chosen for the move of 4073 from the Park Royal Depot to Kensington Science Museum as traffic would be light with the original style of 3500 gallon tender following the "Castle" on its journey through the streets of London on the 4th. June, 1961.
Loading of the tender earlier that day had been more difficult than had been envisaged as its brake gear had fouled the low loader, but this view shows just how much heavier the engine itself was in comparison with the tender with a distinct difference in the ground clearance between the two sets of equipment."