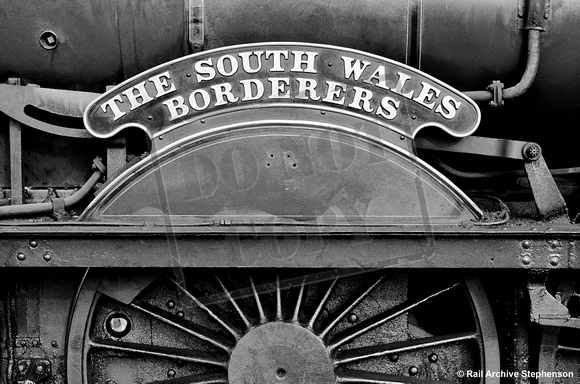 Nameplate of Castle No 4037 The South Wales Borderers.

Peter Kerslake adds "Sadly, in this late photograph, 4037 "The South Wales Borderers" has somehow lost its impressive brass Regimental Crest from this side, its former location being evident from the four holes clearly visible on the splasher.
I remember this locomotive being a regular visitor to Plymouth in the 'fifties, as it was shedded at Newton Abbot and always bore its crests in those times, being a favourite with the Newton Abbot footplatemen, regularly rostered to Top Link passenger duties until being withdrawn in September of 1962.
Rebuilt from "Star" "Queen Philippa" in June of 1926 it was renamed in March, 1937."

Robert Trevelyan adds " The crests were removed by a member of staff at Exeter shed around 1962, he later showed them to me before he handed them over to a senior railway official in 1965."