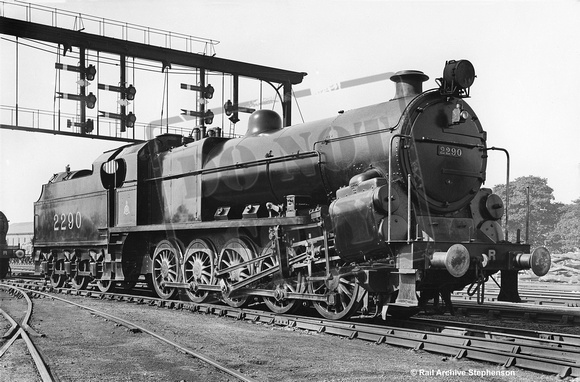 The MR four-cylinder 0-10-0 Lickey banker No 2290 built at Derby in 1919 after being equipped to burn oil shortly before the Grouping is at Bromsgrove in 1923 with the engine facing north, in the throat of the shed yard.
Peter Kerslake says "An early view of "Big Bertha" showing the massive headlamp which was essential for night time banking duties from Bromsgrove up to Blackwell at the summit of the Lickey incline. When the engine was condemned in 1956 after almost forty years service the lamp was transferred to itsr initial replacement the Standard 9F 2-10-0 92079.
The Lickey saw a variety of motive power on banking duties throughout the years with "Jinty" 3F 0-6-0 tank engines sharing the tasks with Western Region "8400" panniers from July 1956 after the arrival of 8402 at what was now the Western Region depot in February 1956, to be followed by twelve more of the class in late 1956 and early 1957 before the depot was finally closed to steam in September 1964."
Photo: Rail Archive Stephenson
Rail Archive Stephenson
Powered by ZENFOLIO User Agreement
Cancel
Continue