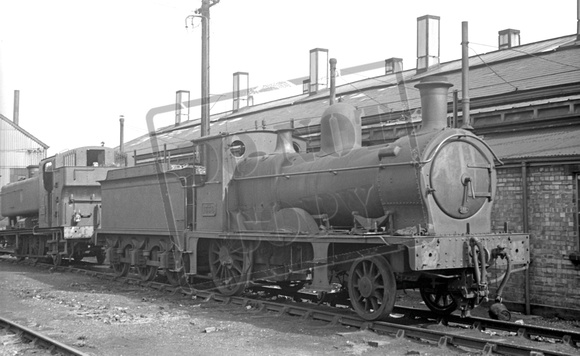 Peter Kerslake says "Built in 1894 by Dubs & Company for the Midland and South Western Junction Railway 1336 , as she became in her later G.W.R. days , had beeen originally numbered 12 .
Allocated to Reading Depot in her GW.R. days from early in 1926 the engine remained on Reading's books until 1952 when she went into Swindon Works stock shed for storage .
Whilst at Reading 1336 had worked local passenger dduties on the Didcot , Newbury and South Coast lines echoing her earlier years with her previous owners , but she also worked local pick up freights in and around the Reading area
Removed rom the Works stock shed in early
1953 this engine was a favourite for enthusiasts ' specials but was subsequently taken back into store at Swindon again before being scrapped in may of 1954 .
In this view 1336 has lost her leading driving wheel set and her buffers are also missing for some strange reason so she's clearly out of use , possibly remaining so until her 1952 move to Swindon stock shed. "
Powered by ZENFOLIO User Agreement
Cancel
Continue