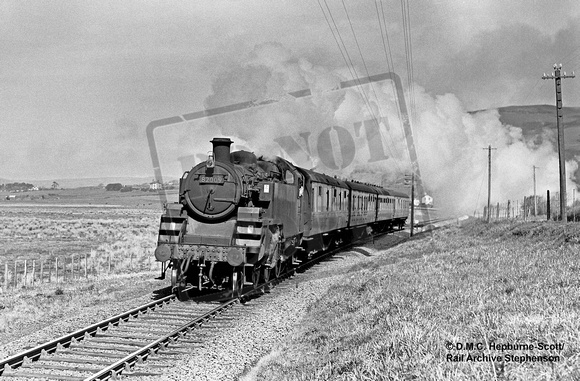 Unusually from a location perspective this is taken from the 'up' side of the line looking in the down direction, taken next to the A493 near Rhownair about 2 miles south of Towyn. The large building to the left of the engine in the middle distance is Esguan Hall.
Peter Kerslake says "The Standard Class 3 leaves an impressive smoke trail over the Cambrian coast landscape as it heads along the single line skirting the coast at Towyn with a four coach local working. This engine was one of the first four of the class to arrive on the Cambrian network in the mid-fifties."
Photo: D.M.C. Hepburne-Scott/Rail Archive Stephenson
D.M.C. Hepburne-Scott/Rail Archive Stephenson
Powered by ZENFOLIO User Agreement
Cancel
Continue