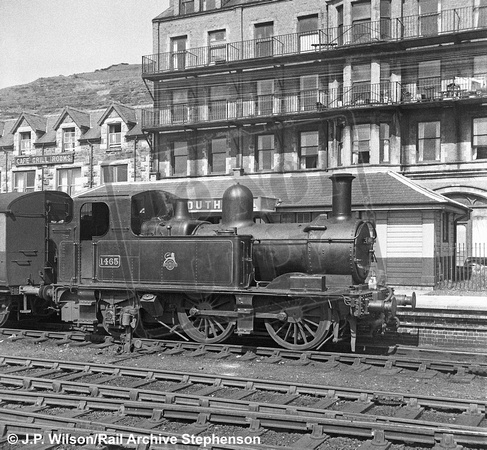 GWR 14XX No 1465 at Barmouth on May 14, 1951.
Peter Kerslake says "1465, which is waiting on the Dolgelley shuttle service operating on the line to Bala, is fitted for "push and pull" working with the apparatus in the small box on the buffer beam and visible just between the buffers. This service usually operated from the station's "Excursion Platform" over the level crossing at the eastern end of Barmouth station. The "1400" class had operated these services since before the war, replacing a steam railcar which had worked between Barmouth and Dolgelley until the early 1930s."
Photo: John P. Wilson/Rail Archive Stephenson
John P. Wilson/Rail Archive Stephenson
Powered by ZENFOLIO User Agreement
Cancel
Continue