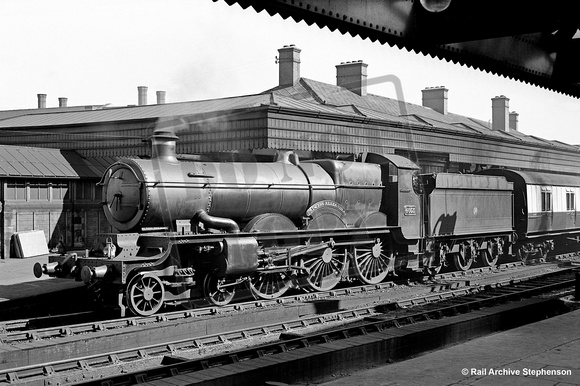 Peter Kerslake says "4053 "Princess Alexandra" looks her best here at Shrewsbury station as she waits to take a working forward to Chester and possibly Birkenhead in 1938.
Whilst Shrewsbury was the end of the line for G.W.R. and in later years Western Region locomotives working up from the Westcountry on the "West to North" long distance passenger rosters they were to be found on the Chester and Birkenhead services for many years to come.
The absence of any brass beading on the splashers and cab is clear to see from this image and 4053 has been fitted with the outside "Castle" design of steam pipes which date from October of 1933 , the engine remaining in service until July of 1954.
At the date of this view in 1938 the allocation of the "Stars" saw them spread over eleven Motive Power Depots, with ten being based here at Shrewsbury, whilst Bristol Bath Road had the most at twelve and Landore had eleven.
The remainder were to be found at Wolverhampton, Taunton and Swindon with four each, three being at both Gloucester and Oxford, two at Worcester and one at both Weymouth and Newton Abbot".