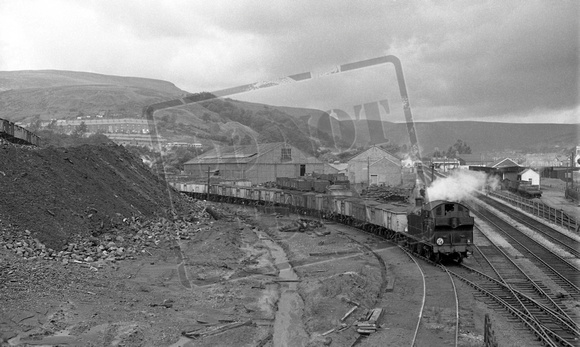 Peter Kerslake says "A splendid scene from typical Welsh coal mining territory here at Treorchy in the Rhondda Valley with the little "Taffy Tank" dwarfed by her lengthy rake of loaded coal wagons.
Typical miners' cottages line the hillside overlooking this area of activity and the main line to the right would link Treherbert to the north with Pontypridd in the south.
The locomotive has a "Target Disc" in position for this duty, and such coal workings would have been well within the capabilities of the class which were equally at home on both feight and branch line passenger duties during their forty years or so in service, with the vast majority of the class of two hundred being found at the numerous Welsh Motive Power Depots."
Powered by ZENFOLIO User Agreement
Cancel
Continue