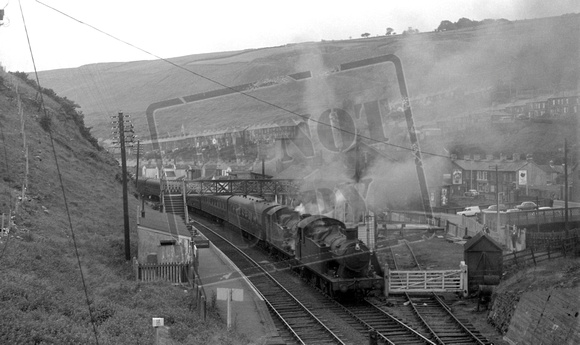 On a returning excursion from Barry Island

Peter Kerslake says "An unusual pairing of two "5600" tanks on a heavy passenger working here at Tylorstown in the Rhondda Valley amidst typical Welsh valley scenery, an excursion from Barry Island.
Built in two batches, no less than 200 of this class saw service with the Great Western, primarily in and around South Wales, and it is significant that even as late as 1956 no less than eighty seven of the initial batch were still allocated to Welsh Motive Power Depots, with just thirteen being shedded outside Wales.
The first four withdrawals were 5636, 5639, 5683 and 6687 in 1962, whilst the last in service was an elderly 5605 which survived until 1966, with nine being saved for preservation.

This could only be a scene from a Welsh valley with the lengthy rows of terraced miners' houses set into the hillside and overlooking the little town of Tylorstown in the Rhondda.
Two "Taffy Tanks" are double heading an excursion returning homeward bound from Barry.
So many of the branch lines through the Welsh valleys have now gone, and the little freight yard here looks neglected and run down in this view from 1963 but it's nevertheless a delightful portrayal, well captured despite the lack of any sunshine.
© Rail-Online
Powered by ZENFOLIO User Agreement
Cancel
Continue