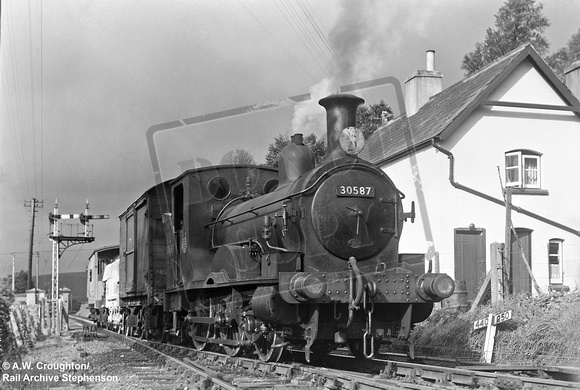 Peter Kerslake says "Beattie Well Tank 30587 heads a single wagon of china clay, sheeted over as was the practice to keep the white stuff dry and from flying away in the wind.
Originally numbered 298 when built by the London and South Western Railway, it worked on London and South Eastern suburban duties from 1870 until the late 1890s. This engine and two classmates were sent to Wadebridge for these china clay duties.
The trio lasted in service in Cornwall until September 1962 when they were replaced by three "1366" Pannier Tanks drafted down from Weymouth; 30587 and 30585 were both preserved."
Photo: A.W. Croughton/Rail Archive Stephenson
A.W. Croughton/Rail Archive Stephenson
Powered by ZENFOLIO User Agreement
Cancel
Continue