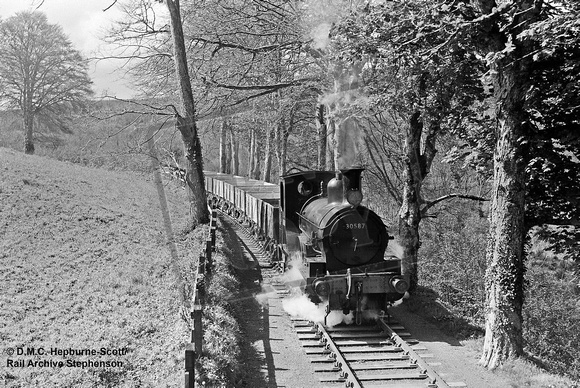 Peter Kerslake says "30587, one of the Beattie Well Tanks so familiar on the six mile long Wenford Bridge china clay line, heads a rake of empties up from Boscarne Junction to the china clay drying sheds for another load destined later in the day to be worked back down the branch to Lostwithiel and thence onward "up the line" to Plymouth or more probably to the docks at Fowey or Falmouth for shipment away by sea.
There was a water column on the branch line at Penhargard within Pencarrow Wood a necessary facility for the Beattie locomotives with their limited water capacity of just 550 gallons, water coming from a spring above the line.
Of the three Beattie locomotives , one was in regular use on the china clay branch, one was engaged on station pilot duties at Wadebridge and one was kept in reserve untill they were all finally withdrawn after sixty years service here in Cornwall and replaced in September of 1962 by three "1366" class pannier tanks from Weymouth."