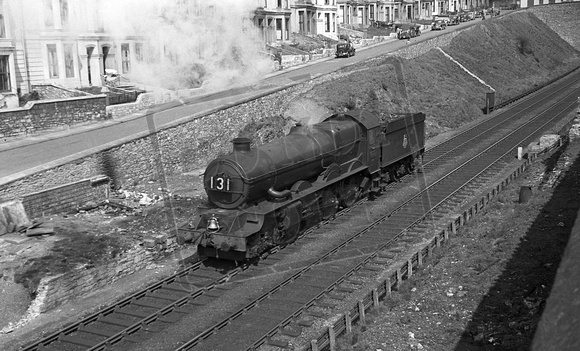 Now allocated to Old Oak Common and happily a more frequent visitor to the far West than when it was at Bristol Bath Road, 6000 backs out to Laira shed through Mutley Cutting. 6000 has worked the 10.35.a.m. from Paddington down here to Plymouth, the relief to the "Cornish Riviera". When at Bristol 6000 was rostered by Bath Road shed on "North to West " workings through the Severn Tunnel to and from Shrewsbury.

I've failed to record the date of my picture here except to show it as from 1956, but 6000 has not as yet had the replacement front frames and new inside cylinder block fitted, and it is likely that those improvements were applied when 6000 had a Heavy Intermediate Overhaul at Swindon from October to December 1956, so my image is clearly from earlier that year and as it's a relief working most likely during the Summer Services.
This fine view through the cutting, with Mutley Tunnel just out of view on the right, has long since been completely ruined by an awful concrete car park extending from the tunnel wall just visible almost as far down to the relay box.
Remains of the old Mutley Halt, going back to when Millbay was the principal station, can be seen on both sides of the tracks at this location., and the perambulator outside the house with its small occupant doubtless enjoying the sunshine appears in a number of my photographs from here.
A bit of engine smoke never harmed anyone
Powered by ZENFOLIO User Agreement
Cancel
Continue