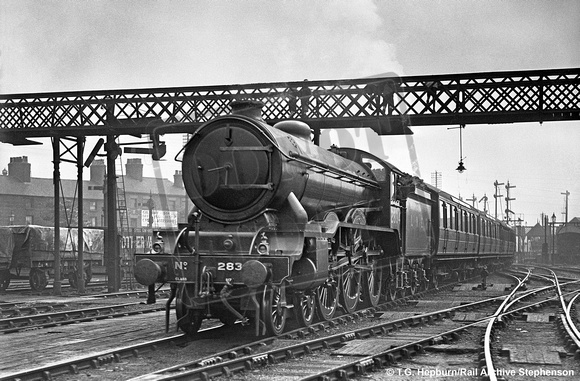 B17 No 2834 Hinchingbrooke enters Lincoln Central with the northbound Harwich to Liverpool 'North Country Continental' on May 17, 1932.
Peter Kerslake says "2834 was one of the second batch of 42 of the class numbered from 2810 to 2851 inclusive built at Darlington Works between August 1930 and June 1936. The engine is its early days of service and lasted as B.R. 61634 until August 1958, just two years before the last of the class 61668 "Bradford City" was condemned.
It was on services such as this that the B17s excelled, working main line passenger duties over a wide area of Great Eastern metals in addition to handling express rosters on the Great Central lines between Marylebone and Manchester London Road."
Photo: T.G. Hepburn/Rail Archive Stephenso
T.G. Hepburn/Rail Archive Stephenson
Powered by ZENFOLIO User Agreement
Cancel
Continue